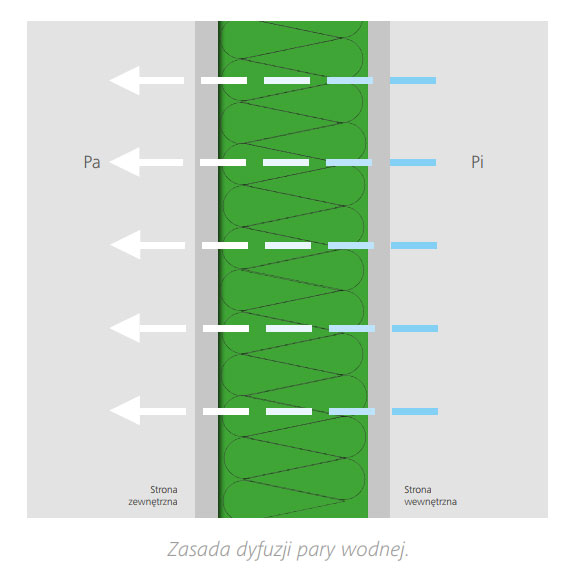 The STEICO building partitions are characterized by an open diffusion system, i.e. a deliberately designed layered system that allows the safe transfer of excess moisture outside the building partition in accordance with the principles of building physics. The idea of a layered system open to the diffusion of water vapor was introduced to the light wooden frame technology at the beginning of 1990 on the German construction market. Open diffusion structures were then in the initial phase of research and constituted an alternative to conventional frame construction. The term conventional frame construction is understood as the wall structure stiffened from the outside using a wood-based panel (usually OSB type board) filled with insulating material inside and sealed from the inside with a vapor barrier foil. The cited system is the basis of a classic construction for further expansion, which consists in supplementing the construction with additional finishing materials, usually with a plasterboard on the inside and a thermal insulation board made of polystyrene with a recommended plastering system from the outside. The cited classical framed partition is diffusion-closed – the transfer of excess moisture from the inside of the structure (in accordance with the physics of the building) outside the barrier is not possible in any direction due to the layered system used. In the case of closed structures, diffusion process of water vapor diffusion or convection phenomenon may cause its excessive condensation inside building partitions. In both cases, the lack of condensation water to the outside of the barrier can cause extensive construction damage: – permanent moisture in thermal insulation materials (without evaporation), causing a progressive decrease in the thermal insulation of the partition, – deformation and reduction of load bearing capacity of timber and wood-based panels – development of dangerous fungi and mold inside the barrier, – deterioration of acoustic insulation. In order to avoid the adverse effects of the long-term impact of condensation water on building materials inside the building’s structure, it is necessary to allow excess moisture to drain away from the partition as quickly as possible. Its safe transfer can be ensured by correct design and construction of open diffusion and thermally insulated materials with hygroscopic properties. Such materials enable periodic storage of excess moisture and leveling of moisture levels by passing it further to external diffusion open shells. This means that specific amounts of condensate can be tolerated in properly prepared structural elements.