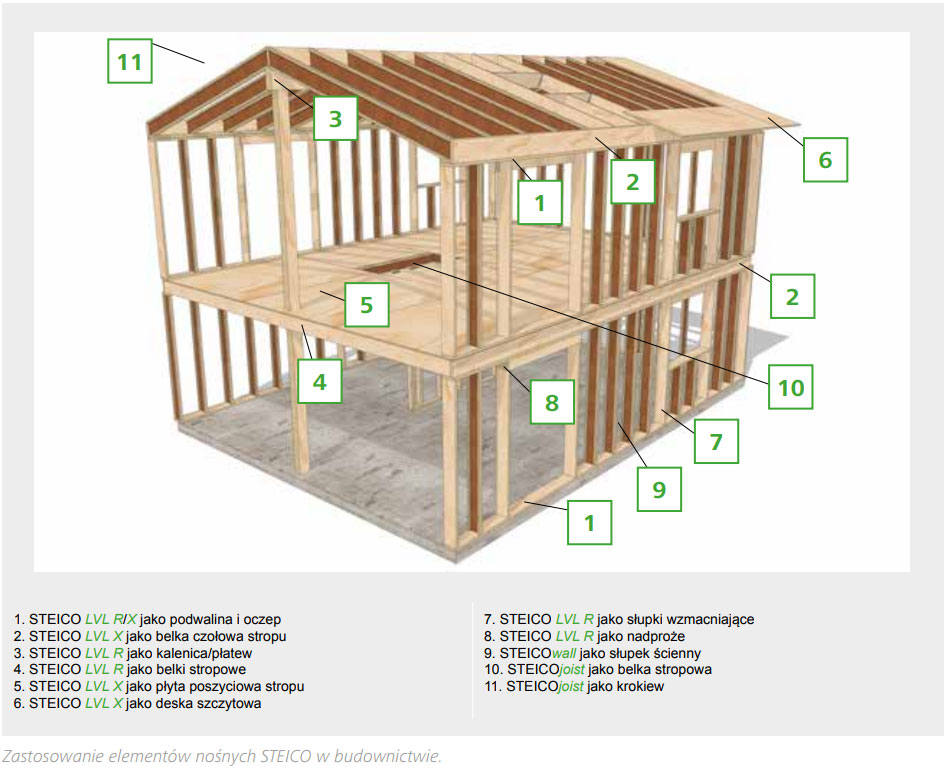 Proper design of the object in the wooden frame technology should be based on a regular modular schedule, also known as a spacing module. The modular mesh specifies typical spacing between structural elements and their cross-sections. It is closely related to the widths of the cladding panels, such as stiffening wood-based panels (eg OSB, MFP, chipboard), stiffening fiber-cement boards, gypsum boards or thermal insulation boards. The boards mentioned are available in standard widths of 1250 mm, 2500 mm and less often 2440 mm. In Poland, the so-called German spacing module, also recommended as part of the design of objects in the STEICO building system. Spacing according to the German modular schedule is usually half or a third of the width of the stiffening plate provided for in the design. Spacing of construction elements according to the German modular schedule: 625 mm = (1/2 of 1250 mm) 833 mm = (1/3 of 2500 mm) 815 mm = (1/3 of 2440 mm) The constructions of walls or roofs often require additional holes , e.g. window or door. These openings should be designed by adding additional supporting elements located independently of the typical modular spacing. Thanks to the use of extremely durable STEICO LVL wood of almost unlimited length it is possible to obtain even very large openings for joinery, which allows to meet the requirements of modern architecture and structural statics (Figure 50). The use of modular mesh in timber frame construction leads to the optimization of the building structure. As a result, the amount of waste generated during the processing of finishing, thermal insulation and other construction components is reduced; The use of structural timber is also reduced. Regular spacing additionally contributes to the optimization of the thermal insulation contribution in the entire plane of the building partition. The end result is material savings and reduced labor costs, which translates directly into reducing the final price per square meter of a building.

Reduction of deformation of wooden structures

Buildings made in the construction of a wooden frame are often negatively assessed due to the tendency of wooden elements to “work”, i.e. deformations. This opinion is due to the fact that wooden buildings that were created a dozen or so years ago were very often built from wet wood, in a diffusion closed system, without careful consideration of critical details, eg ceiling connections with external walls. The effect of the typical manufacturing errors cited are usually the progressive deformations of the wooden structure, and as a result, construction damage in the form of cracks in the structure of the finishing or façade panels, the unsealing of the building. However, the state of knowledge about solutions dedicated to wooden buildings has changed dramatically over the last decade, placing Poland on the position of one of the leading suppliers of prefabricated frame houses in Europe. In spite of this, you can still find dishonest contractors who, contrary to the provisions of the Construction Law, use “wet” wood as basic construction elements. Therefore, it is recommended to choose professional, reliable assembly teams and use of outlets that offer certified dry wood / wood-based elements.

According to the applicable building law, construction should not use solid structural timber with humidity greater than 18% (15% with a tolerance of +/- 3%) and laminated timber with a humidity greater than 15% (12% +/- 3%). One of the reasons for this regulation is the protection of load-bearing wooden elements against fungi. As it is commonly known, if the moisture content of wood is below 20%, the amount of water accumulated in its structure is insufficient for the development of fungi. It is said then that the timber construction element remains in a “dry protective state”. A further criterion of the regulation is the fact that “dry” wood undergoes less deformation due to the natural drying phenomenon (shrinkage) compared to “wet” wood. Shrinkage of wood consists in decreasing its size (length, width / height, thickness) as a result of drying out. For individual wood species, the degree of deformation of the size is assumed in [%] for a change in the humidity level by 1% each.

In buildings with flawless construction (usage class 1), the target humidity of the built-in softwood support elements varies between 8 and 10% during the building’s use. This is called hygroscopic balance, which wood obtains after tight integration into the building structure. This fact should be taken into account when designing building objects. The designer and contractor should choose and use load-bearing elements made of wood with the moisture as close as possible to the hygroscopic equilibrium. In other words, it is necessary to minimize the differences between the humidity of the wood being built in during the installation and its target level of humidity, i.e. what wood will be obtained during the use of the building. STEICO solutions supported by decades of experience in the industry shed new light on the methods available to reduce the deformation of wooden structures: • STEICO I-beams are delivered to the construction site in a dry state, similar to the hygroscopic balance of wood (humidity does not exceed 12%). The characteristic cross-section of the I-beam also causes that even as a result of the natural swelling and shrinking effect of wood, the I-section retains its dimensions as close as possible to the factory ones. As a result of the application of the structure based on I-beams, no cracks / scratches occur in the plane of the finishing or façade panels of the building. Also the connections of the vapor barrier membrane with I-beams with staples, due to the very low degree of deformation, are not exposed to tearing and unsealing over the course of years, which is often the case with traditional wood types C24, KVH.

Construction of the building 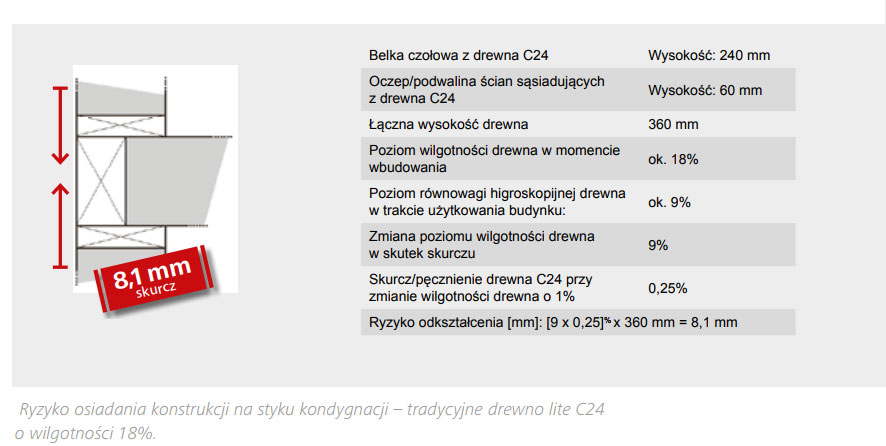